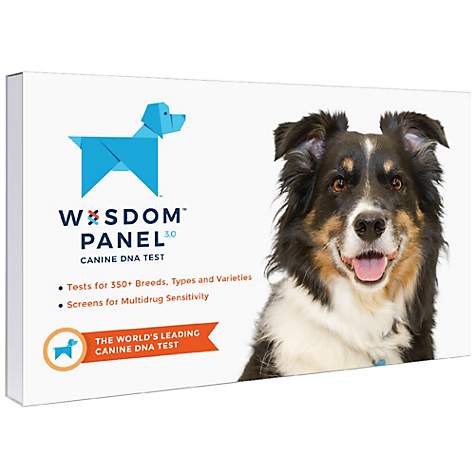 How Accurate are the Wisdom Panel Dog DNA Kits?

If you have a mixed breed dog, especially one you adopted from the shelter, you’ve probably wondered at one point or another about what breeds constitute their make-up. Enter the Wisdom Panel test. This relatively revolutionary test came out on the market a few years ago and claims to be able to tell what breeds make up you furry friend. How accurate are the test results? Read on to find out.

The Wisdom Panel test is a doggie DNA test. The company cites itself as the “world’s leading DNA test for dogs,” according to the Wisdom Panel website. It has the largest breed database in the world, which does help support this claim. Over 350 different breeds and breed types are included in the database, which your dog’s DNA sample is then compared to.

The Wisdom Panel goes back three generations to tell you what breeds make up your furry family member. The test also features an estimate of your dog’s full-grown weight, which can be handy if you adopted a growing puppy and want to know how big they might get. The test is also helpful for the genetic mutations that it tests for. Depending on the version of the test you submit, the Wisdom Panel can determine if your dog has a drug sensitivity gene known as MDR1 or if your dog has the gene for Exercise Induced Collapse, which has the potential to be deadly.

Accuracy of the Wisdom Panel Test

The Wisdom Panel is considered the most reliable genetic test on the market for dogs, but that doesn’t tell you how accurate the test results are. The company itself does not offer information on how accurate its testing is, citing that the accuracy is highly variable depending on the quality of the genetic sample that has been collected from the dog. Obviously, a sample that has not been degraded and came from a purebred is likely going to be more accurate to test than a “Heinz 57” dog that came about from indiscriminate breeding of multiple dog breeds.

According to the National Canine Research Council, in 2009, the Wisdom Panel was found to be 84% accurate when dogs were tested that had two purebred parents. With the addition of more genetic markers to the test, the test is believed to be 90% accurate.

The company continues to put a significant amount of research into its product. Genetic markers are a main area of research and analysis. These are areas where there are variations in a dog’s DNA. During the initial development of the test, over 19 million genetic markers were analyzed, with over 13,000 dogs evaluated, making it a rather comprehensive test. As a part of testing, over 1,800 markers are used. The test compares your dog’s DNA against other dogs, so the more breeds that are tested, the more accurate the test is.

For more concrete analysis, the company also provides validation testing for accuracy, with repeated testing of a sample and analysis by third party specialists. The tests are also run in a USDA-accredited laboratory, which ensures quality control of the samples and testing environment.

Versions of the Wisdom Panel Test

As of July 2020, there are two versions of the Wisdom Panel test available on the market. The first is Essential and it tests for ancestry, traits and key health insights. Covers over 350 breeds, screens for 25+ medical conditions and looks at 35 traits, such as coat type and ideal weight.

The second version is Premium and it includes all the tests in the Essential version, while also screening for genetic conditions and more than 200 health tests.

Older versions of Wisdom Panel (2.0, 2.5, 3.0, 4.0, Health, Insights, etc.) are still found at some online retailers and can still be processed by the company when submitted to the lab.

Both versions of Wisdom Panel involve collecting a DNA sample from your dog’s saliva.

The Wisdom Panel company is owned by Mars Petcare, which also owns Banfield, the largest corporate veterinary practice in the world.  Banfield offers a subscription wellness plan for dogs (Optimum Wellness Plan), and certain versions of the plan include the Wisdom Panel test as part of the plan package. If you are looking at taking your dog to a Banfield veterinary practice, you might want to look into the test, especially if you have a puppy.

Many people wonder if the Wisdom Panel is going to tell them that their dog is a pit bull.  First of all, it’s important to note that the term “pit bull” is not a single dog breed type. Instead, it is a group of breeds that have similar physical traits and have generally been bred as guard-type dogs with certain characteristics. As this is such as diverse group, the company Wisdom Health does not have a profile to determine that a dog is a pit bull.

Varying amounts of different breeds may be in your pit bull, including American Staffordshire Terriers, Bull Terriers, Mastiffs, Bulldogs, and Boxers. The dogs breeds commonly involved in making up a pit bull are guarding and terrier groups. If your dog is considered a pit bull, just know that the genetic analysis is not going to declare them a pit bull.

Other Things To Know About the Test

One of the advantages of the Wisdom Panel test offered through veterinarians is that the test includes a large number of genetic markers for different diseases and conditions, such as Degenerative Myelopathy. This pre-screening for genetic diseases can make the test incredibly valuable. For some dogs, it may point out that they could have a clotting disorder, which could then be addressed before they undergo major surgery.

The Wisdom Panel is not designed to prove or disprove whether a dog is considered a purebred dog, especially given that there can be some variance even between dogs in the same litter. The test uses statistical analysis to assess your dog’s genetic markers, and there are 11 different models of family trees, with only one model as purebred dogs. As such, the test tends to favor mixed breed ancestry.

The Wisdom Panel tests are considered to be about 90% accurate. They can provide a great deal of handy information, much more than just breed analysis. The disease predicting capability of the test makes it a great asset in your pet’s healthcare plan.

A look at the accuracy of Embark Dog DNA tests

As an Amazon Associate, this website may earn a commission from products or services linked to on this page.